Comics and the Making of...

Although all my comics vary, the process of creating them has reached a point of standardization for me. I always expect to have a written draft before I put in too much time drawing background art or characters, to ensure that the story I have is the story I want to tell. I prepare backgrounds and character designs far in advance before I even draw one page of the comic.

This page is intended to showcase the best and the most interesting pages of my comics and parts of my process. Thus, spoilers ahead! To read the whole comic, just head over to its individual page.

Click on the image to view a larger version.

As Part 2 begins, I can show off some of the work I spent on preparing for Part 1, as well as some of the best pages of the 220 total pages. This art includes location set-up and character designs for multiple seasons. It works alongside written documents to build the world of Valley Forest through natural elements, architecture, and fashion. 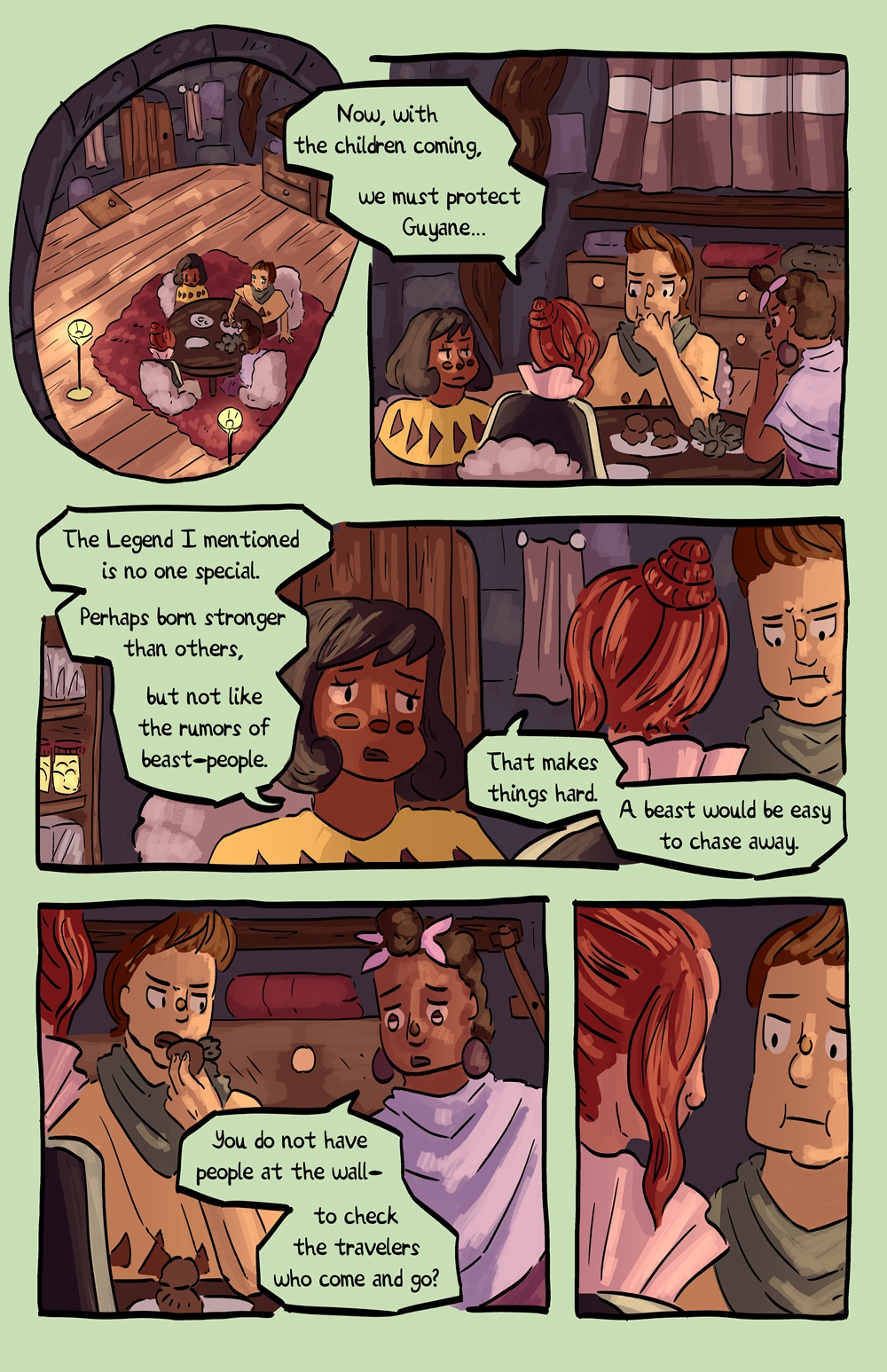 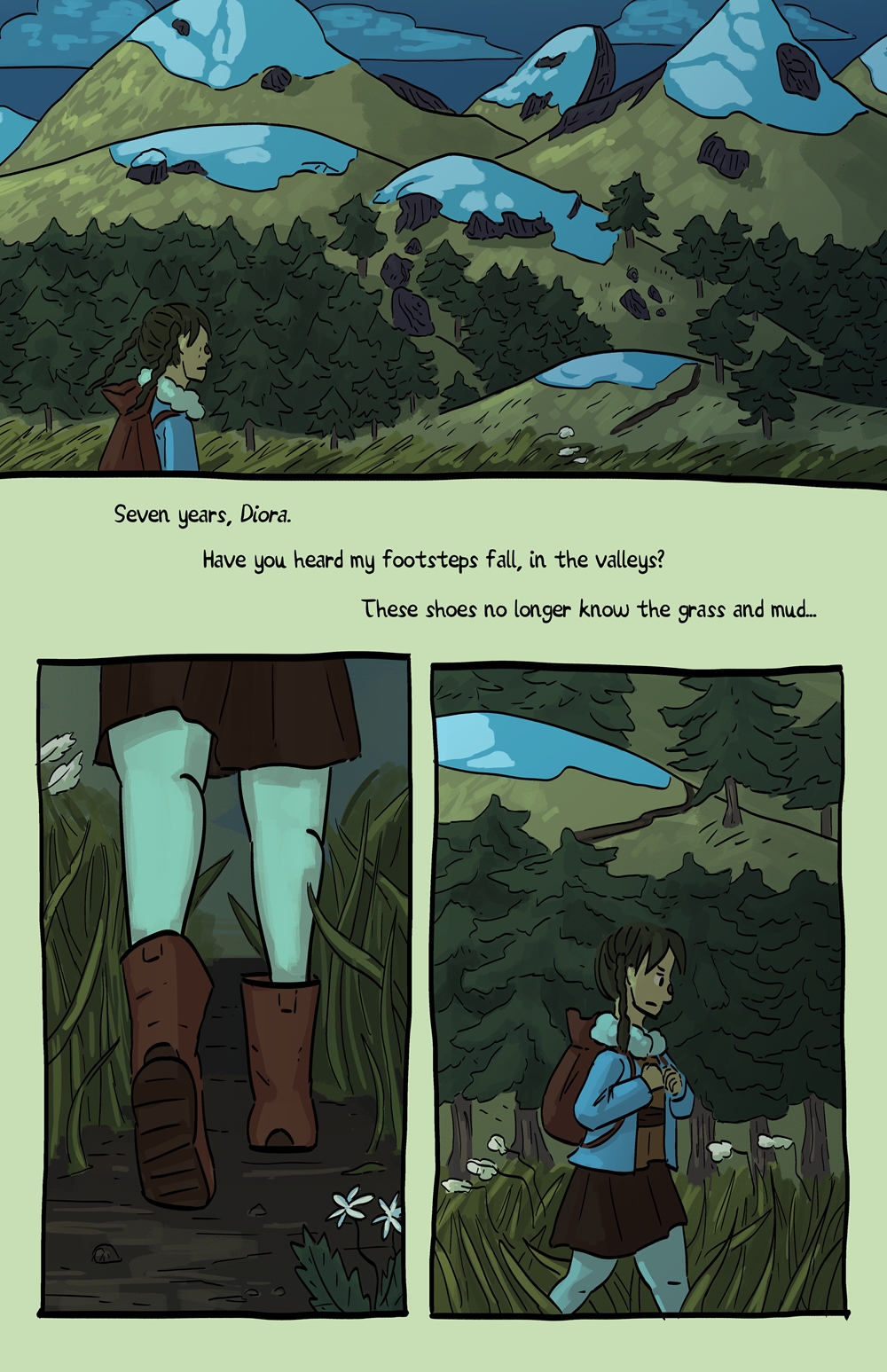 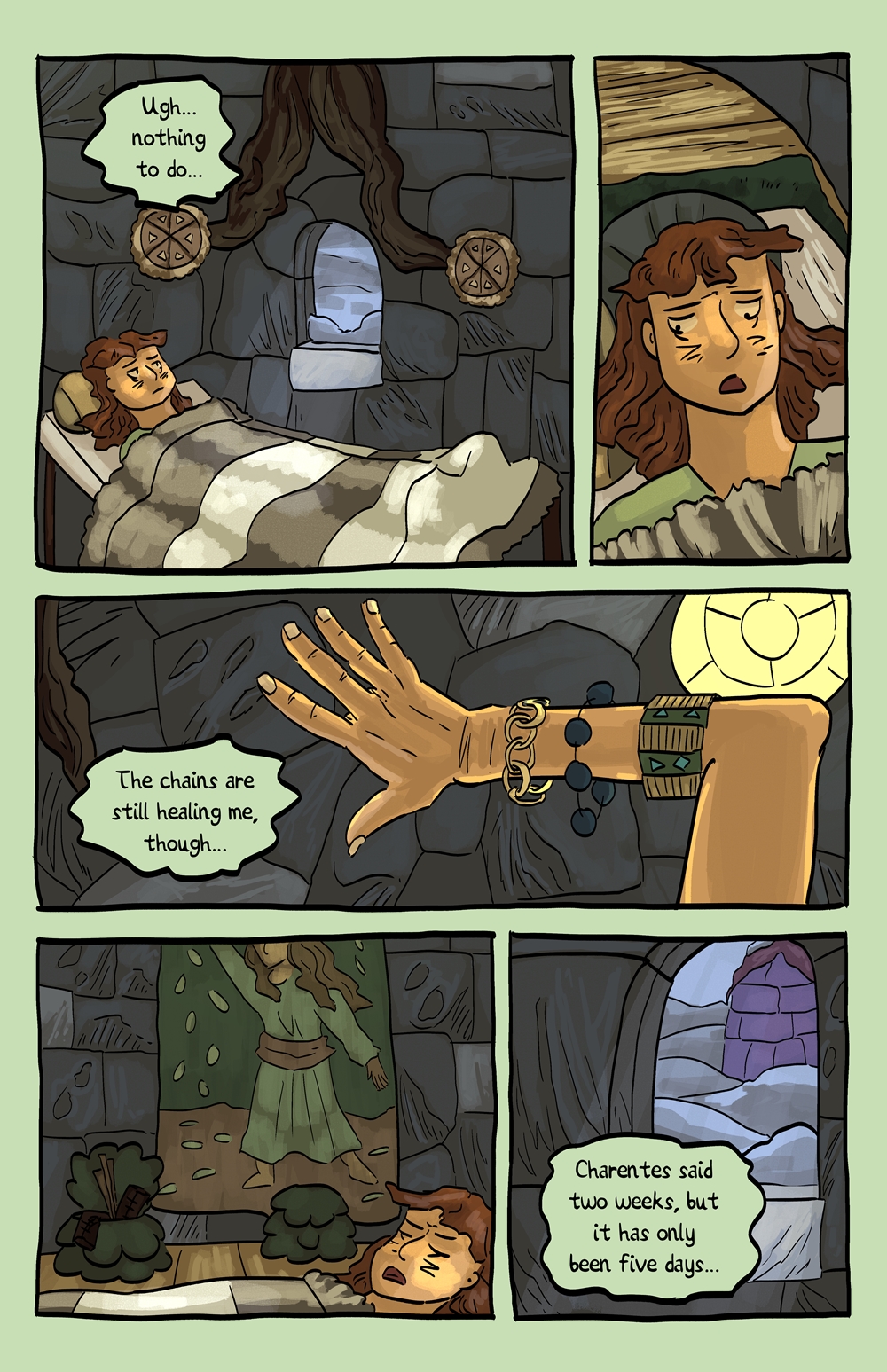 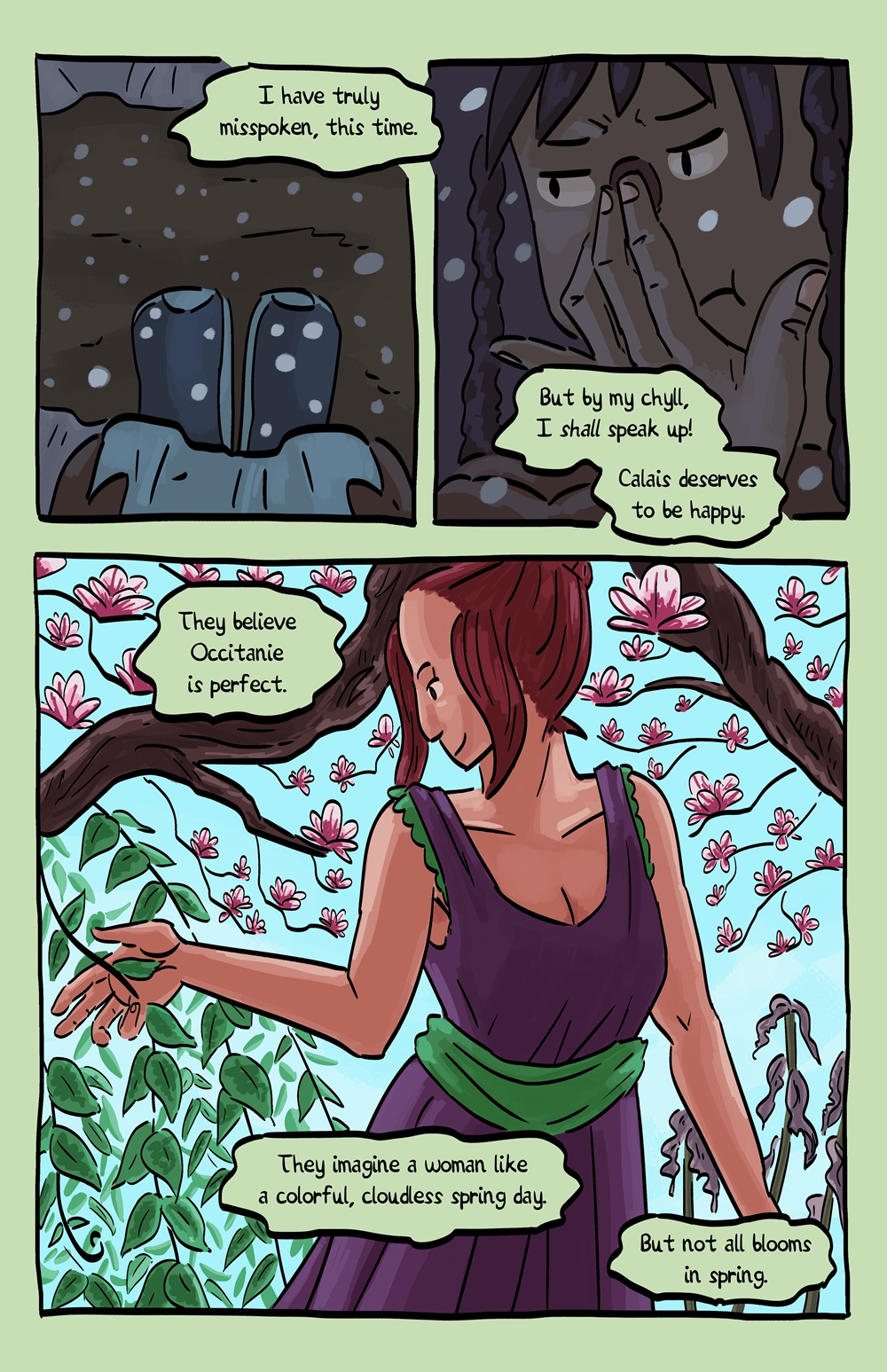 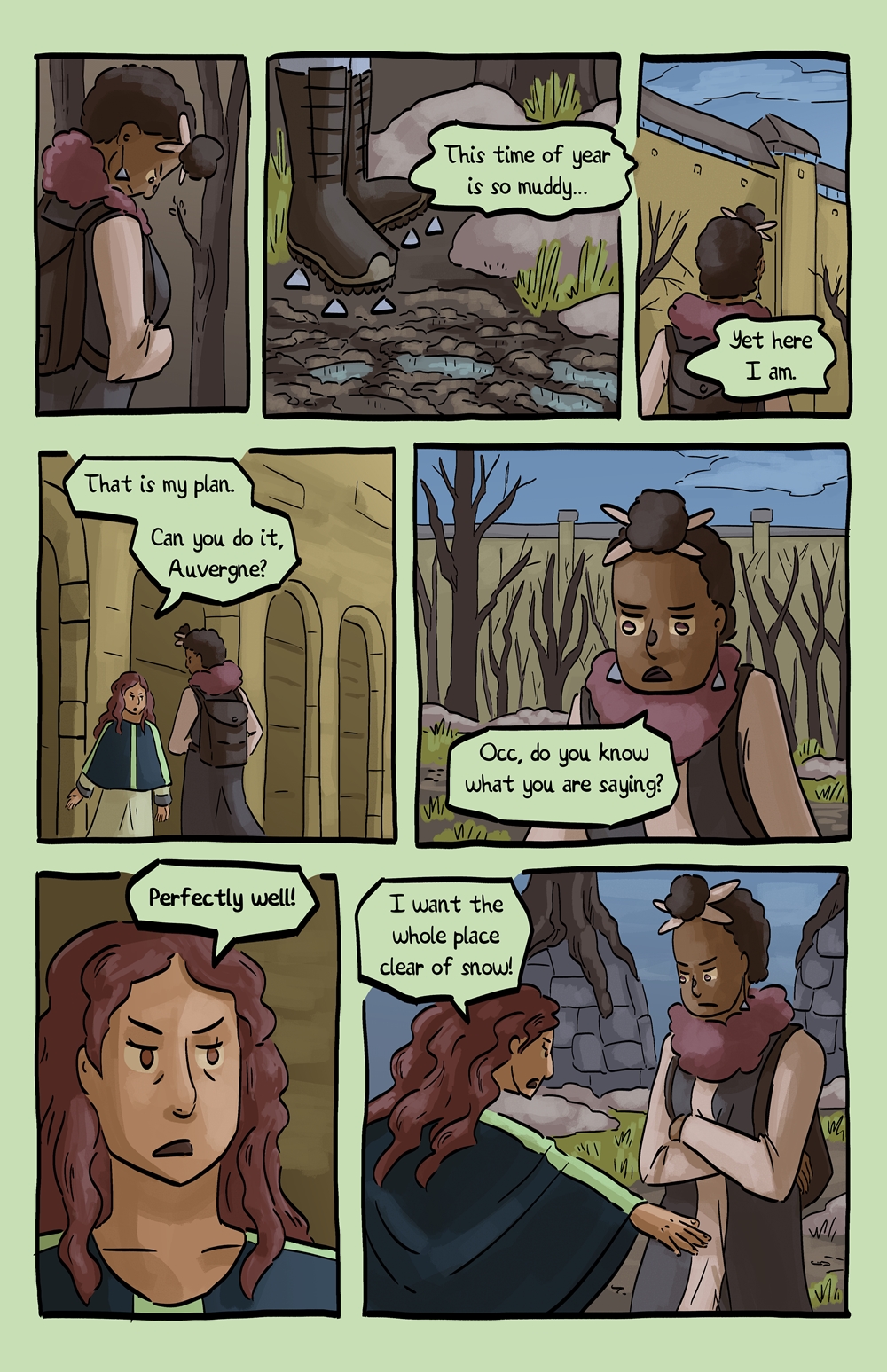 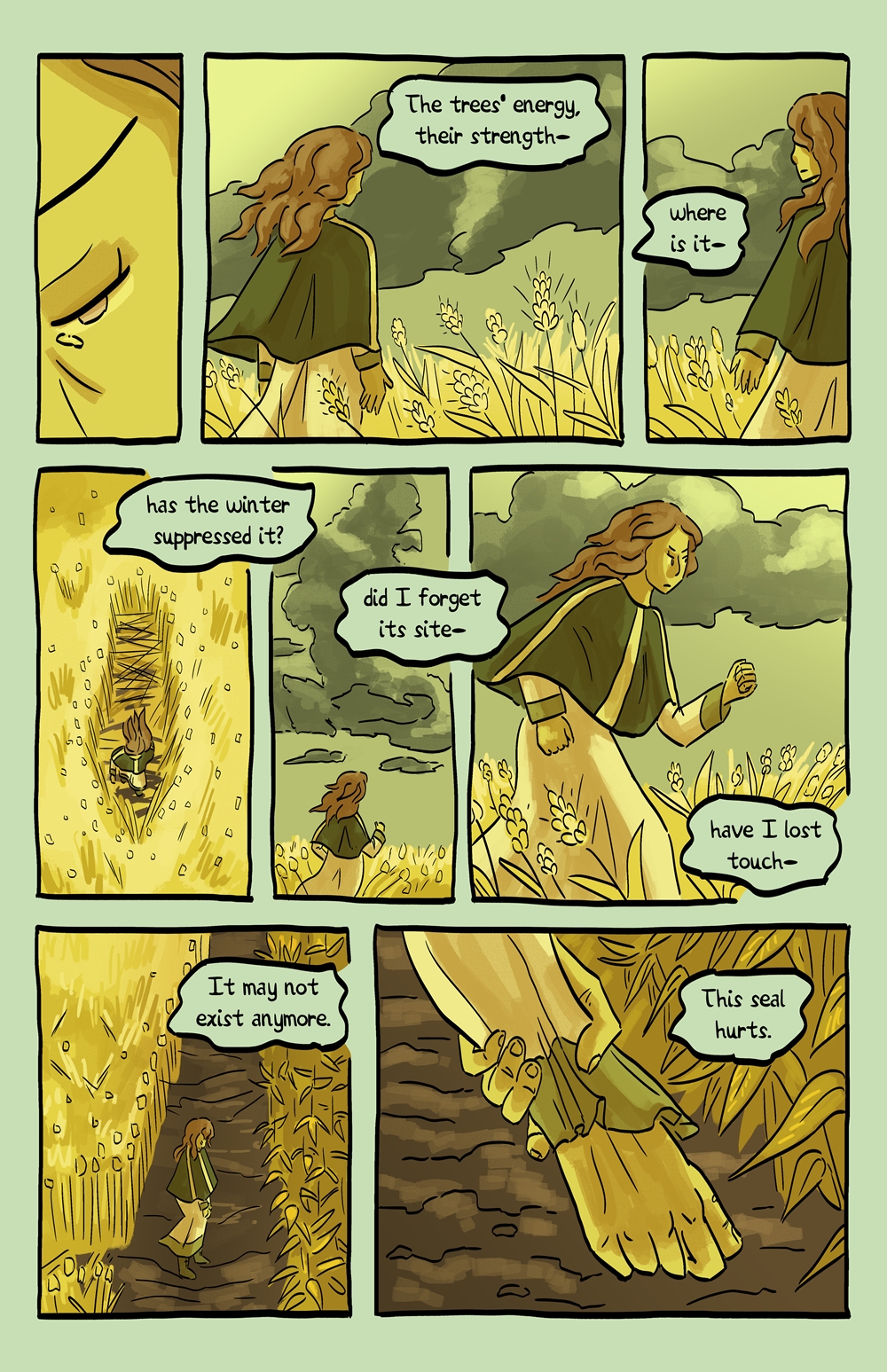 The challenge with Letters to Toast was to show Cereal and Yogurt in the same scene as something that took place months ago, in entirely different seasons. I chose to alter their colors to a scheme that was essentially complementary to the main color scheme.
The other challenge was that in drawing the comic, I used a more painterly style to color in the characters. This grew a bit tedious but allowed me to develop new ways of using adjustment layers to make interesting color palettes.

Outside Toast's cabin. 2018. Since the forest is mostly orange with a bit of green, it made the most sense to put Cereal and Yogurt in blue tones.

Winter Town. 2018. While the town, villagers, and Toast are in blue, Cereal and Yogurt remain in red and orange. 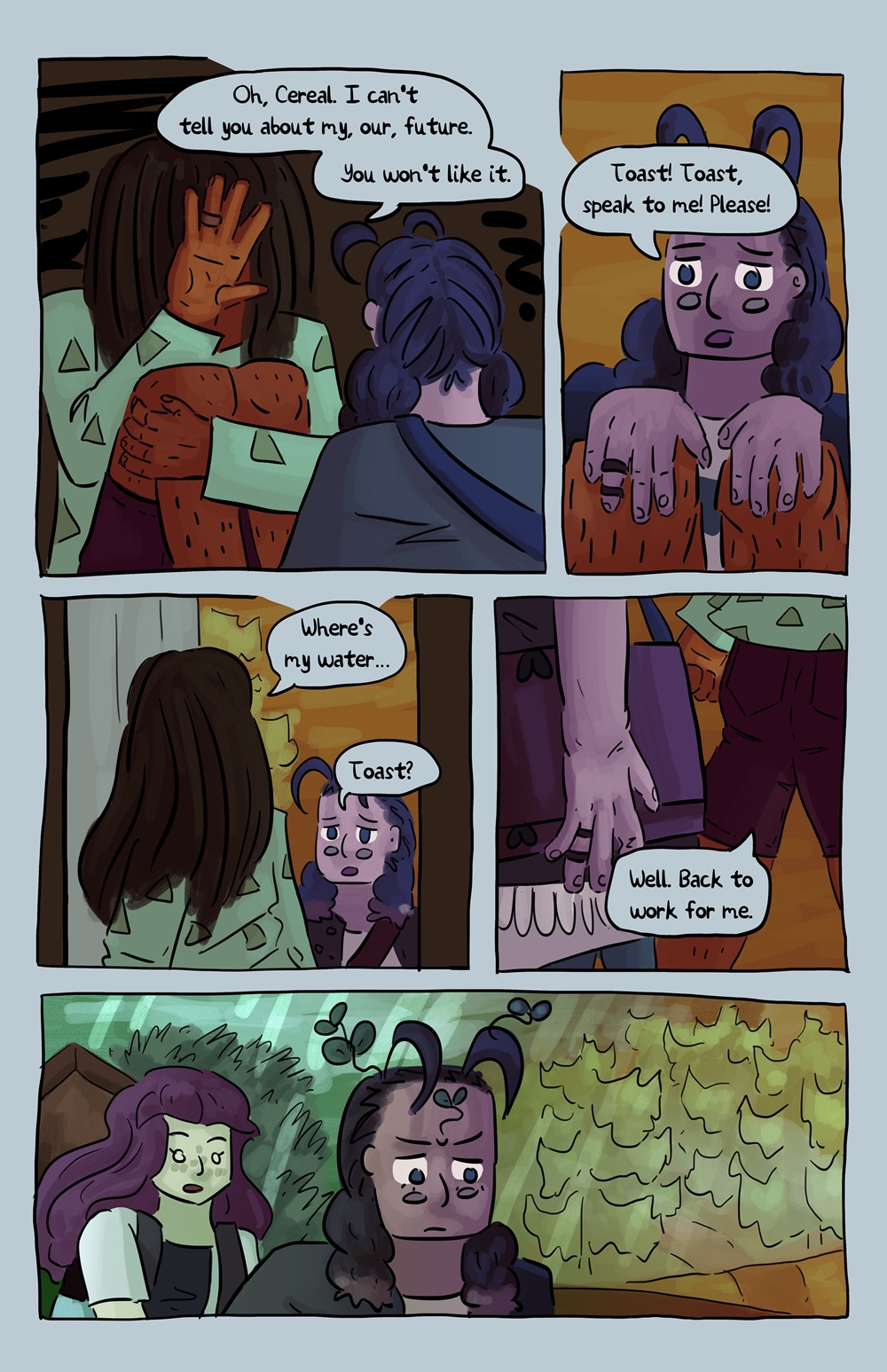 Page 21. 2018. The bottom panel has Cereal and Yogurt changing colors, back to the regular forest color palette, but remaining a bit in their vision of the past.

Having just watched the phenomenal anime Made in Abyss, I wanted to write a story that would take place in the mountains. Different elevations have certain trees and flowers, like the abyss, and the fog could prevent anyone from leaving, not unlike the curse of the abyss at lower levels. 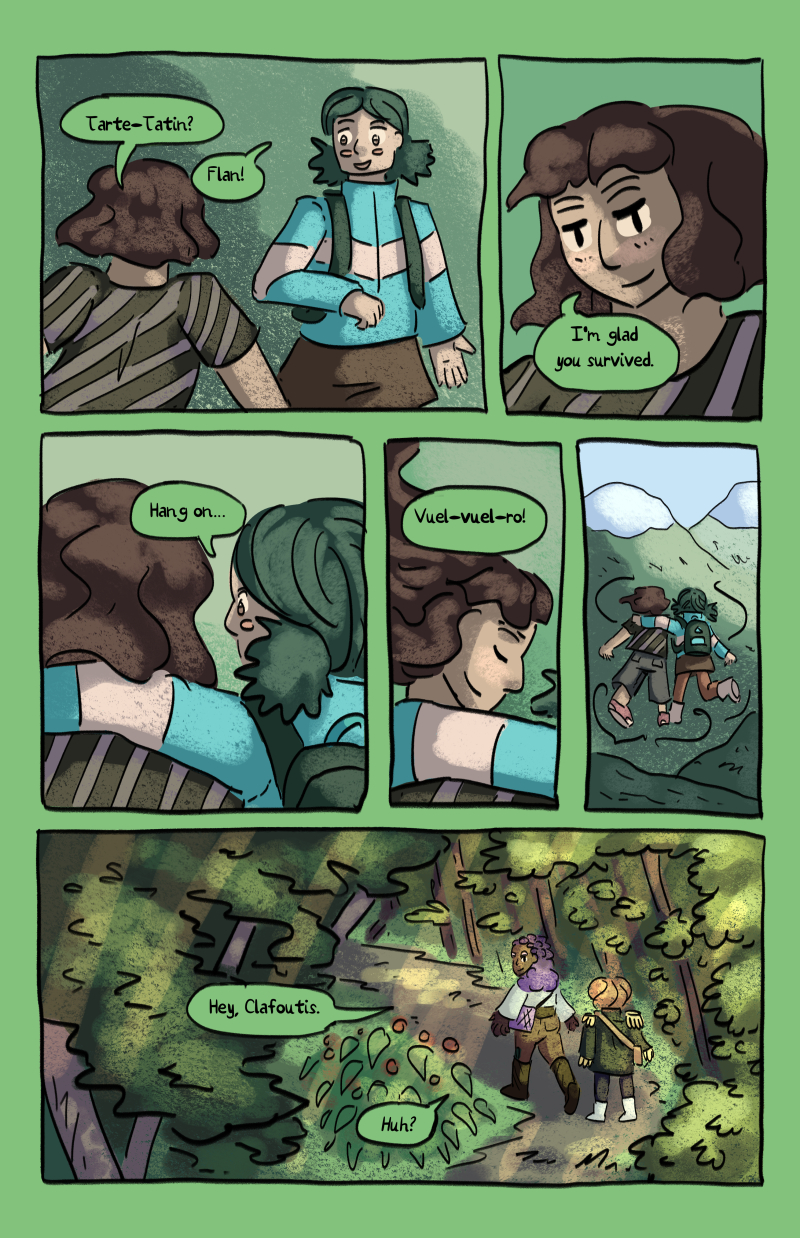 Page 57. 2017. While Flan and Tarte-Tatin are above the tree line, Clafourtis and Choux are heading from the second to the first regions.

I challenged myself to follow Andrew Loomis's guides to setting up interiors using perspective to draw Pepper's house. I used a single-point persepective and put my floor plans and elevations to place every piece of furniture. I even did it in the comic for some of the larger panels. To balance out that extra work, Pepper the Potion Witch has no shading besides the confrontation between Anise and Clove.

Pepper's corner. 2017. Pepper's apartment had one big room that used one floor plan. This comfy chair was in one corner.

Pepper's kitchen. 2017. The kitchen needed two sides: a witch side for brewing potions, and a normal side for food.

Pepper's dining room. 2017. Since Pepper would be growing her own plants for convenience, she has two tables: one for eating and one for growing. 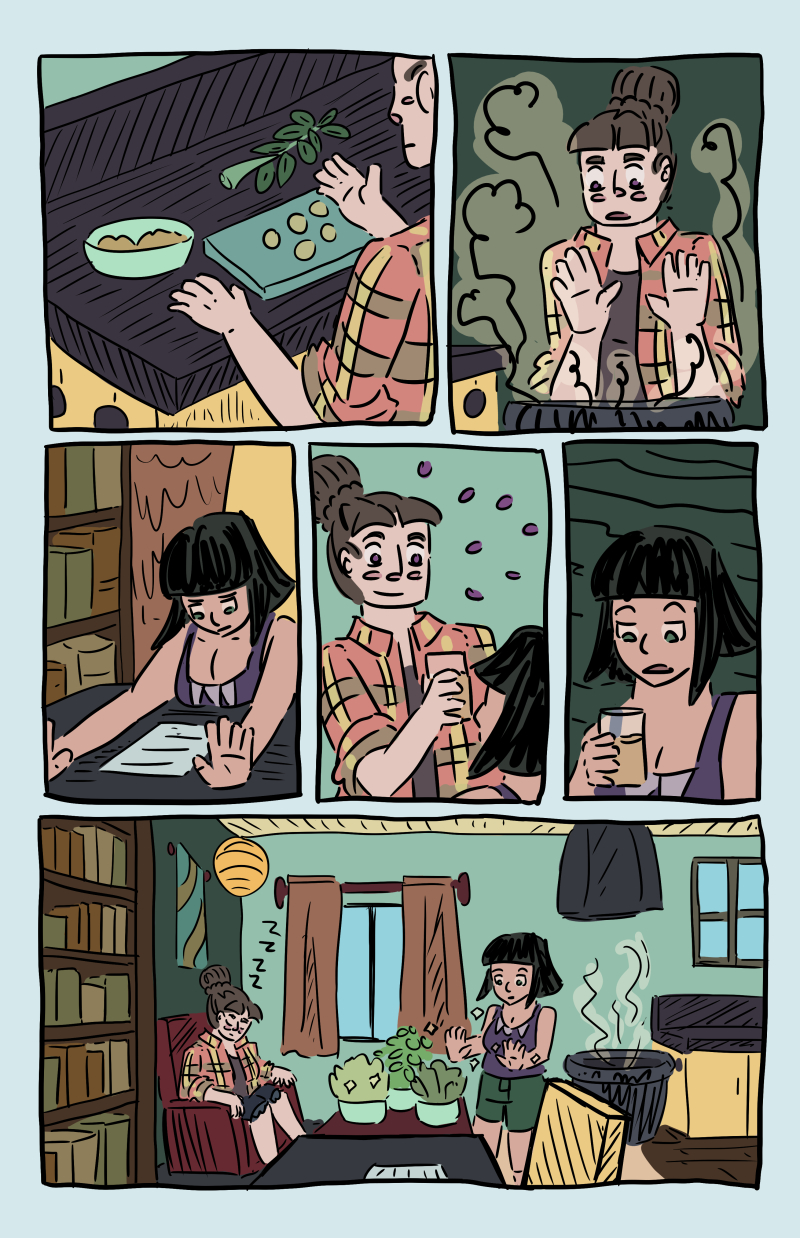 Page 25. 2017. The bottom panel is one that required extra time to properly lay out.

The bulk of preparation for drawing Phantasma was to wander around Paris and take pictures. But beginning with chapters in the second half, I spent a great deal of time developing locations and proper lighting. Phantasma also used over 120 outfits for all the characters, changing by the season.

But the best part of Phantasma was mastering drawing the architecture of Paris. 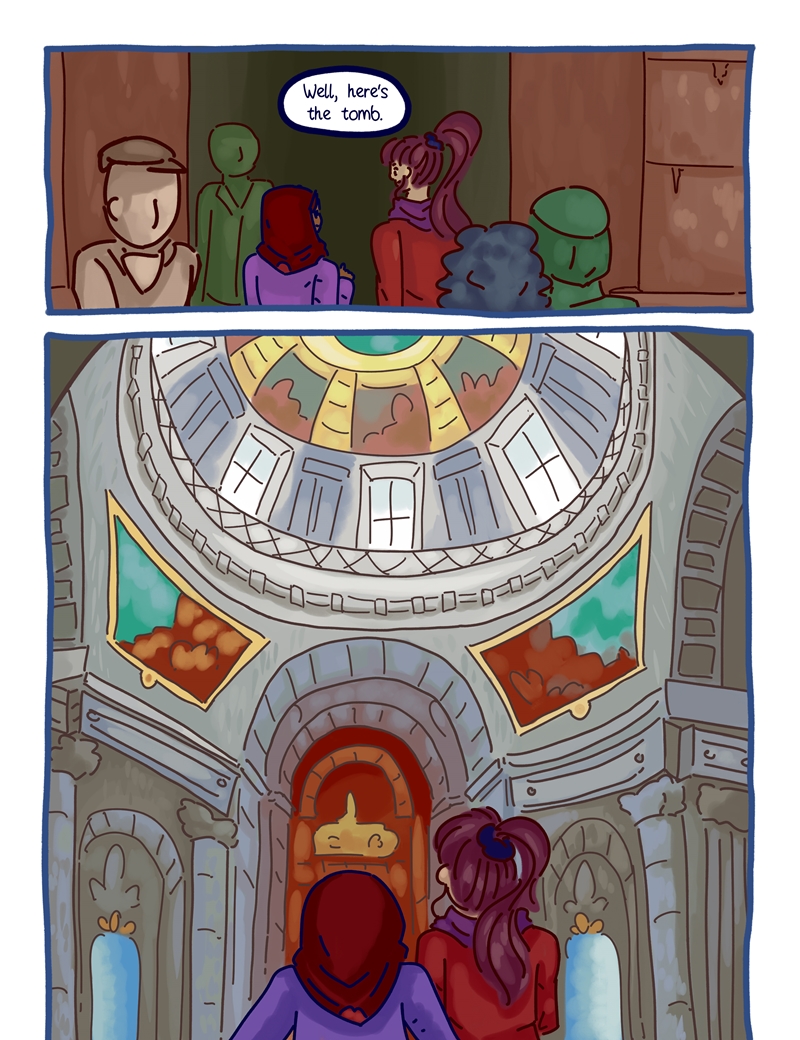 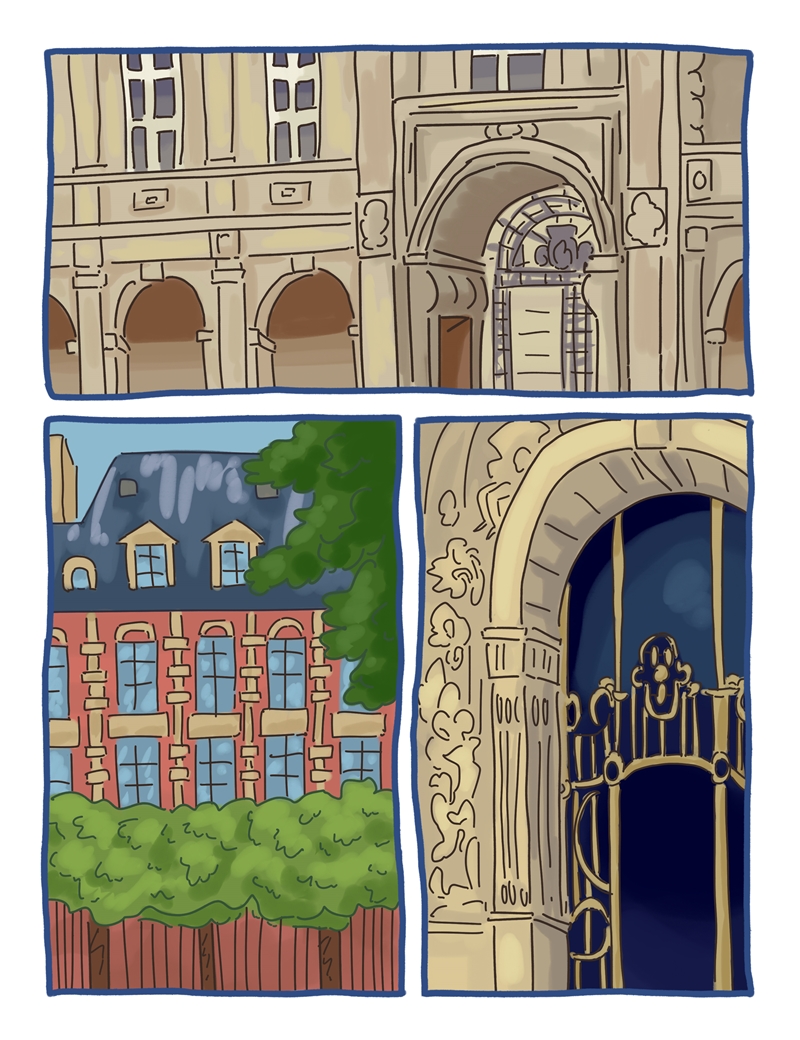 Chapter 32, page 9. 2017. Chapters 32 and 33 required going back to draw everywhere the characters had been in two different styles. 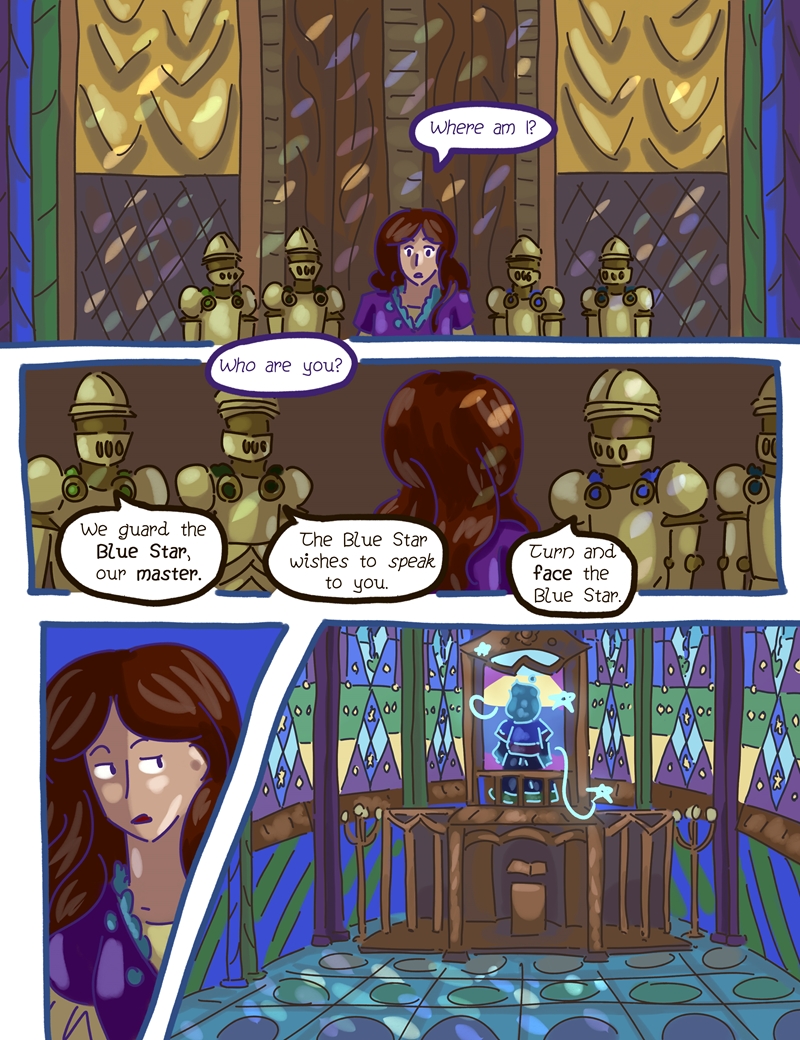 Chapter 29, page 9. 2017. The scenes in the Blue Star's court (a version of the Sainte-Chappelle of Paris) required an enormous amount of effort in designing the stained glass and putting it in perspective. 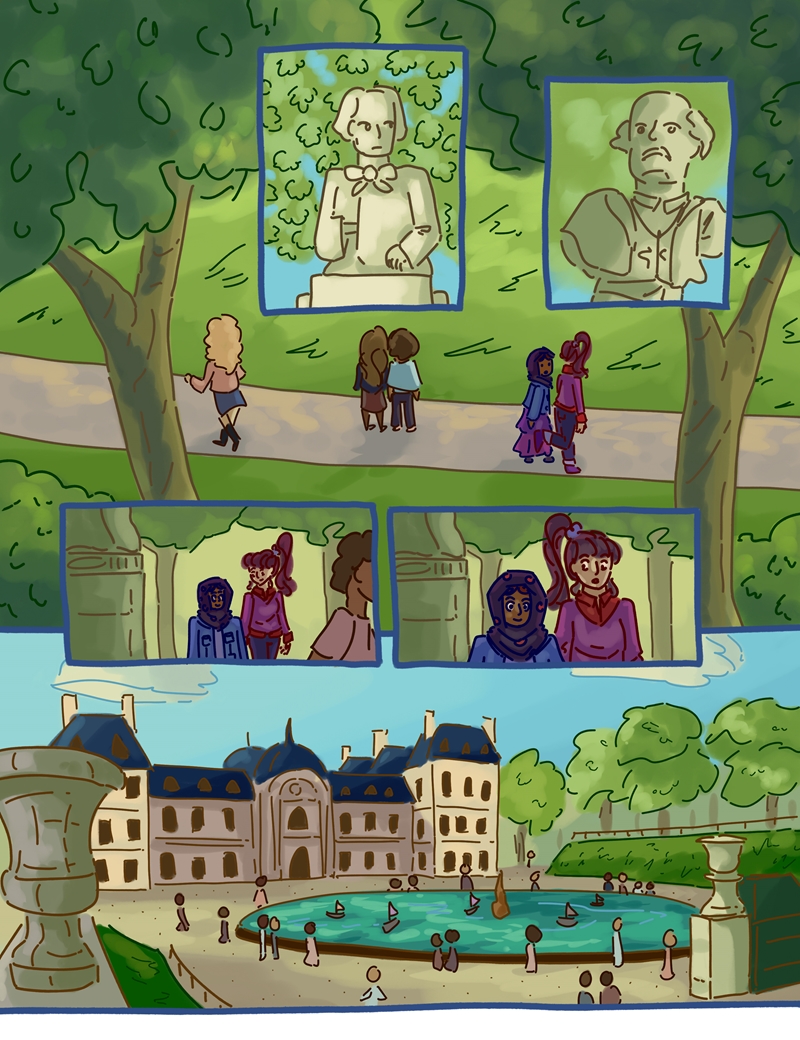 Chapter 24, page 5. 2017. Just as the green leaves take over as the story enters the spring, it also took over the city while I was there. 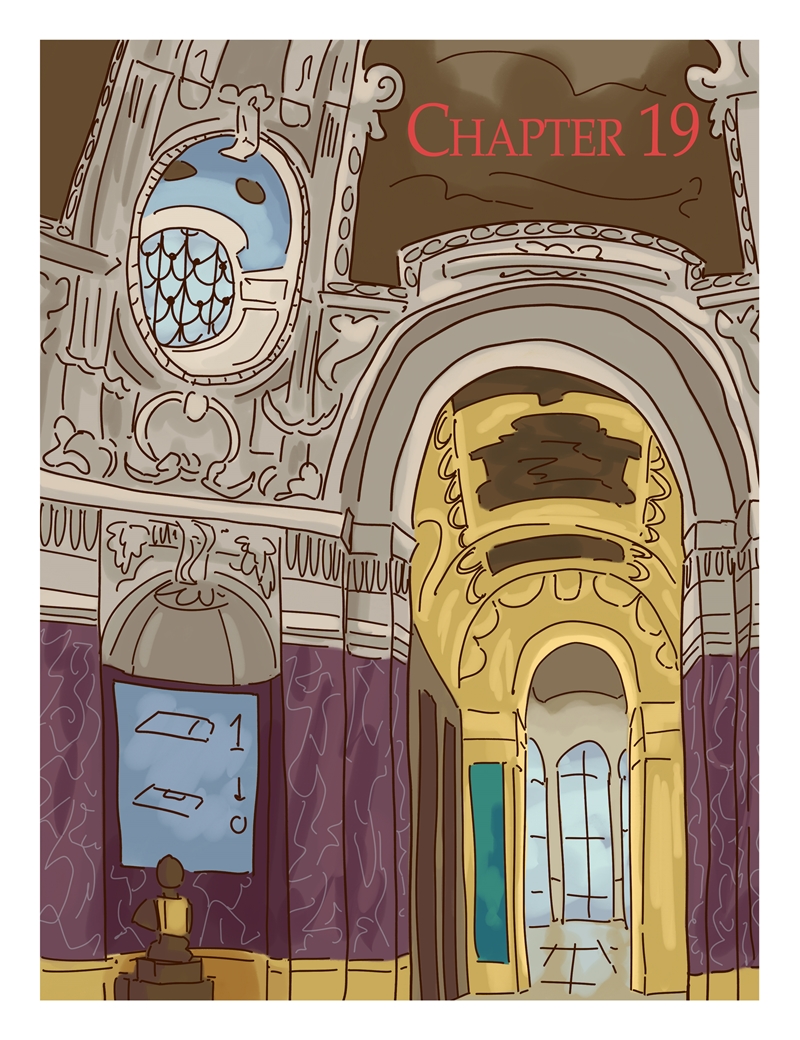 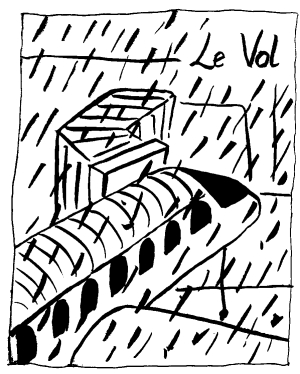 Le Vol is a short comic I wrote for a comic-making class while studying abroad in France. The comic can be read with French in the images and an English translation below it.